Celebrating some of 2000AD's unsung heroes

A prominent 2000AD creator recently published a list of unsung heroes from the weekly's 40 year history, all of them deserving recognition for their contribution. Well, here's another list of heroes from various periods in the Galaxy's greatest comic. 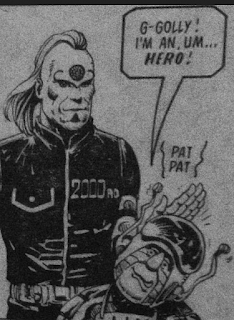 RICHARD BURTON
Less than a dozen editors have spent any time in the big chair at 2000AD, so there's not many people who understand the unique stresses and strains that come with the Rosette of Sirius. Among those few, Richard gets little credit for doing a sterling job in near-impossible circumstances. He took over when creative talent was leaving for the promise of recognition and royalties elsewhere.

Richard kept the comic going and managed to turn things around, putting together an amazing run of iconic stories and art. The Horned God, Zenith, Necropolis, the death of Johnny Alpha - all part of his tenure. So time were Button Man, Hewligan's Haircut, and the first graphic novel collections. Richard also had the tricky task of introducing colour to the prog, and responding to the advent of Toxic.

Were there mistakes along the way? Of course. Any 2000AD editor who claims to have presided over a perfect era is deluding themselves, just like any creator who always finds someone else to blame when things go wrong. But Richard deserves credit for the many things his editorship did achieve, often against overwhelming odds and amid endless mockery of his droid counterpart Burt. 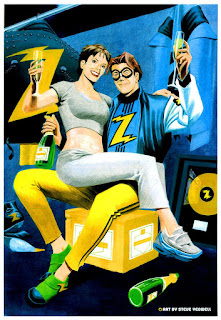 STEVE YEOWELL
This artist has been around the pages of 2000AD for the better part of thirty years, a consumate professional who always delivers. From his early work on Zenith through strips like Maniac 5, Devlin Waugh, Red Seas and many more, Steve is the artist any editor wants to employ. He can draw scripts that appear impossible, sending them on time, every time. You want storytelling that looks effortless? You want an artist who doesn't need their ego stroked to get the job done? Send for Steve Yeowell.

CHRIS BLYTHE
Colourists don't get noticed, unless they mess up. It is one of the invisible jobs in comics, along with lettering and design and - to an extent - editing. A great colourist serves the story and  artist, and Chris is a great colourist. He took computer colouring in 2000AD great leaps forward, enhancing the look of Judge Dredd in particular and the comic as a whole. I'm not sure I ever met Chris, but he did stellar work week in, week out. Most everything looks better with Chris on colouring. 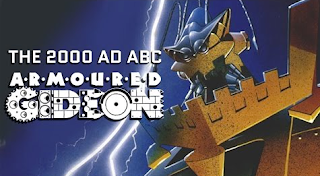 JOHN TOMLINSON
Another former editor of 2000AD, and a writer for the Galaxy's greatest comic as well. John was a freelance assistant in the early 1990s and became editor for a spell, working with Steve MacManus after the previous incumbent was made redundant in a brutal round of cost-cutting. John didn't have long to make his mark as editor, but his contributions are still important such as commissioning Nikolai Dante and America II. He also wrote two under-appreciated strips - the anarchic Armoured Gideon, and the more measured Mercy Heights. 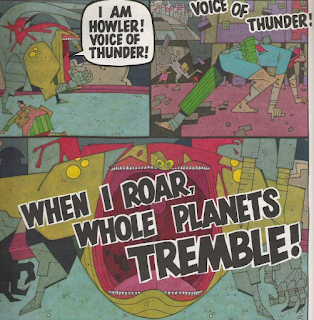 THE LETTERERS
Just as great colourists go unnoticed, so do wonderful letterers - and 2000AD has been served by some giants in that area. The legendary Tom Frame, the wonderful Annie Parkhouse and Ellie de Ville, plus craftsmen like Steve Potter and more recently Simon Bowland. You don't appreciate how good these people are until you attempt some lettering for yourself. It's a skill and an art, leading the eye around the page, shaping the narrative while remaining unnoticed. Truly, letterers are heroes.

AND SO MANY MORE...
Artists like Simon Davis and Colin MacNeil, pouring all their talents and their creative energies into telling stories through paint. Amazing cover artists like Jason Brashill and Mark Harrison, who can bring the front of a comic to life - and who are no slouches at storytelling inside that cover. Art editors and designers like Steve Cook, whose iconic logo still graces the front of 2000AD today and deservedly so.

And the current editor Matt Smith, longest-serving of all the Thargs by many years - he may not be a screaming extrovert like some predecessors, but his time in the Command Module has proven to be among the most fruitful, most trouble-free and more important in 2000AD history. Long may he wear the Rosette of Sirius with pride!
Posted by DAVID BISHOP at 11:57 am