The Top 10 covers I commissioned for 2000AD titles

The 40th anniversary edition of THRILL-POWER OVERLOAD, the unfiltered history of 2000AD by myself and Karl Stock, has reminded me of the amazing talents with whom I was lucky enough to work. I spent twelve years in editorial on various 2000AD titles from 1990 until 2001, going from freelance to staff and back to freelance again.

During that time I commissioned close to 500 different covers from dozens of different artists. Just for fun, here are my top 10 picks from among the many. I could easily have picked another 40 for this list, but these ten will do as a representative sample for today... 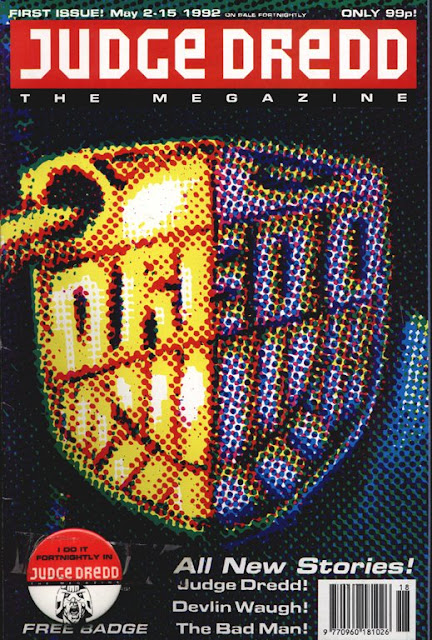 Pop Art inspired piece by Sean Phillips for the Judge Dredd Megazine's relaunch as a fortnightly title in 1992 - and this really did pop on the shelves. It was an experimental effort, but one that worked well and was distinctly different from other comics of the time. 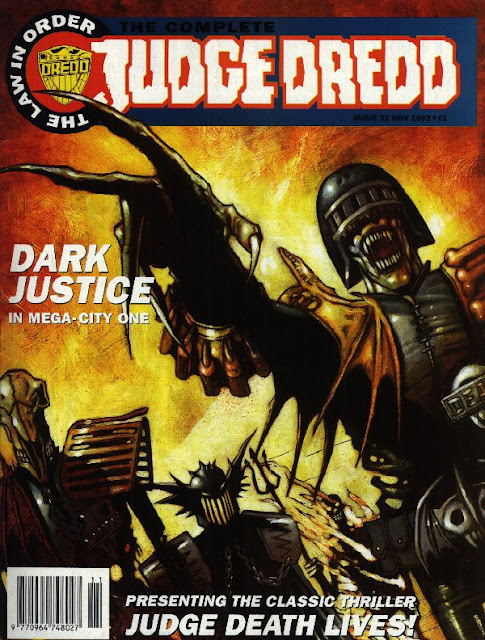 Dean Ormston painted this lush image of the Dark Judges for The Complete Judge Dredd, a monthly re-presenting the future lawman's stories in order. It gave 1990s artists a chance to homage to classic strips - in this case, Brian Bolland's Judge Death Lives. 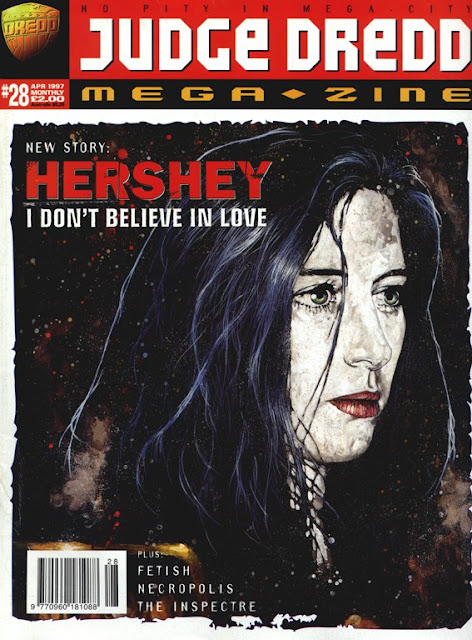 A portrait of Judge Hershey for the Megazine by Simon Davis, now better known for his work on Sinister Dexter and Sláine. Outside the world of British comics, Simon is an acclaimed portrait artist so he was the perfect choice for this striking image of Hershey. 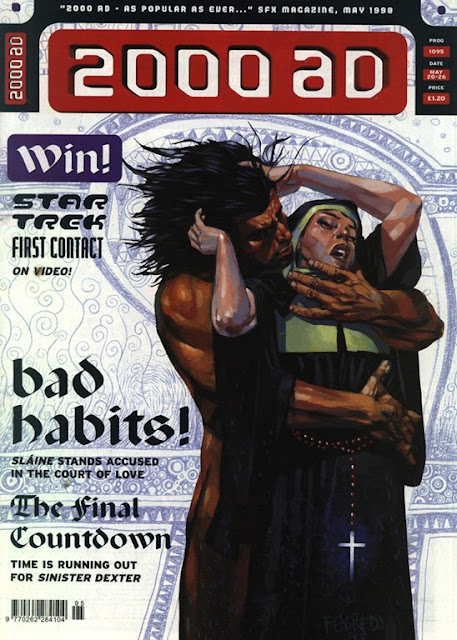 Dozens of the covers I commissioned were homages to artists and striking images. For this Sláine cover I asked Duncan Fegredo to channel Gustav Klimt. It was a fun subversion to have the male character naked and the woman fully clothed for a change. Jock painted a cracking Missionary Man cover for the Judge Dredd Megazine but the image didn't work with our required elements until I tried an extreme close-up, running the text down one side like an old Wanted poster.Not perfect, but eye-catching. 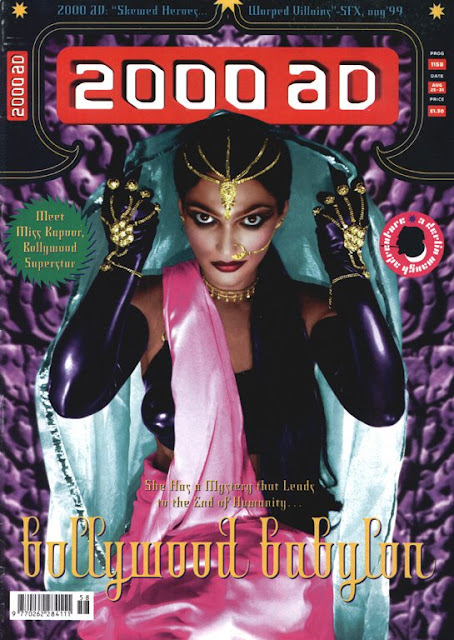 Steven Cook was 2000AD's art editor for many years and always eager to push the design envelope. He was creating some amazing photo imagery for other titles, so when Devlin Waugh went Bollywood it seemed the perfect opportunity to challenge the norm. 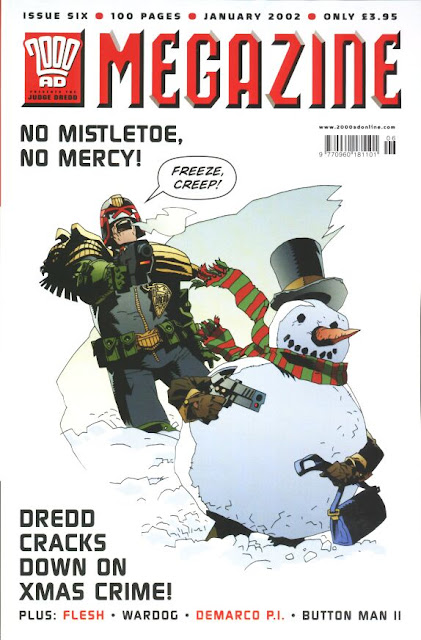 I have an abiding aversion to periodicals who put snow on their logo for the Xmas issue, but am not averse to theming a cover should a fitting idea arise. Kevin Walker provided this festive image for the Megazine, a change from his familiar fully painted style. 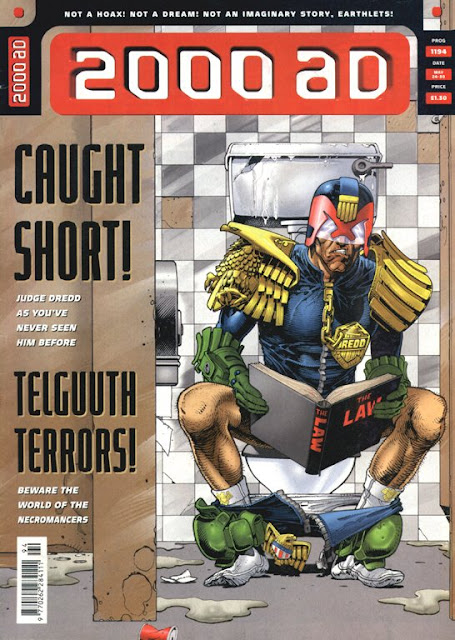 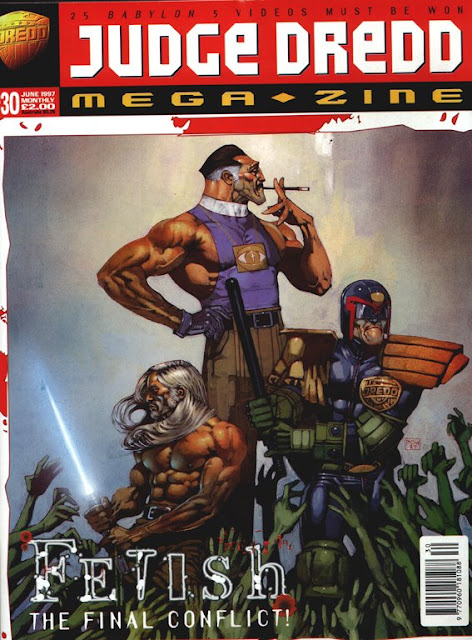 Dermot Power is a great artist who now works almost exclusively in design for films, a sad loss for comics. I managed to lure him back a few times to provide covers, and this image is a corker. I love how it captures Devlin Waugh's utter nonchalance. 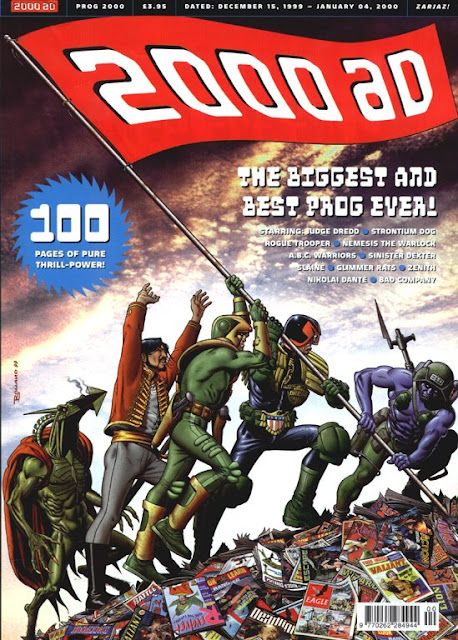 The best single issue I edited, with my all-time favourite cover. Brian Bolland provided this homage to the Iwo Jima flag-raising photo by Joe Rosenthal, with 2000AD characters atop a mound of past British comics - a tribute to those who went before...
Posted by DAVID BISHOP at 9:18 am