A most Remorseful Day: rest in peace, Colin Dexter 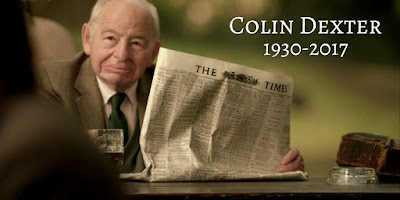 Just read about the death of Colin Dexter, the creator of Inspector Morse. He was 86 and had not been well enough to make his usual cameos during last year's filming of Endeavour series 4, but news of his passing still comes as a shock, and a sadness.

I had the pleasure of meeting Colin several times at signings during the 1990s when he was still writing new Morse novels. He was friendly and quick of wit, with a ready smile and a genuine affection for his readers - a true gentleman of an author.

I read all his novels and loved the Morse TV series. When both ended - the novels in 1999, the show a year later - I wanted to capture my appreciation for them. From that was born The Complete Inspector Morse, published by Reynolds & Hearn in 2002.

The book was a modest success, and three revised editions followed at R&H to reflect the enduring appeal of Colin Dexter's characters. When Titan commissioned a new edition in 2011, just as news of a young Morse TV drama set in the 1960s was breaking.

Four series of Endeavour have followed, with an extended fifth run of episodes in the works for 2018. And I have maintained my appreciation by adding the new show to my appreciative text, now an ebook entitled Endeavour: The Complete Inspector Morse.

Colin Dexter is gone, but his wonderful characters endure thanks to screenwriter Russell Lewis, actor Shaun Evans, and all those involved at Mammoth. There's even a new Morse play on Radio 4 this Saturday, House of Ghosts, written by Alma Cullen.

For those of us who have enjoyed Morse on page or on screen - the worldwide TV audience was estimated at a billion in more than 200 countries - this is a terribly sad day. For Colin Dexter's family and friends, it must be far worse. Our thoughts are with them.


Life, to be sure,
Is nothing much to lose,
But young men think it is,
And we were young.
- A.E. Housman