Editing comics is becoming something of a lost art, with the shift to digital publishing and cutbacks in production spend limiting the amount of time and money available to hone comics. So it's sad to read about the death of Bob Bartholomew, an editor from the golden age of British comics [you can read Steve Holland's obituary here].

While I was researching a series of articles about the history of iconic British weekly comic 2000AD Bob was frequently mentioned by members of the early editorial teams. He had the unenviable task of trying to control the whirlwind that was the Galaxy's greatest comic, dealing with a new generation of editorial iconoclasts and revolutionaries.

When I was commissioned to turn my articles into a book - Thrill-Power Overload: The First Thirty Years of 2000AD, still available here - I was determined to plug the gaps. Quite a few creators and editorial staff had eluded me the first time round, but the book offered an opportunity to plug the gaps and tell the whole story, wherever possible.

In July 2006 I got Bob Bartholomew's address and sent him a letter, asking for an interview. He wrote back within days to politely decline, a true courtesy on his part [he was 83 at the time]. Below is the full text of his reply. Kelvin Gosnell was editor of 2000AD during this period:

I was interested to hear that you are celebrating the 30th anniversary of 2000AD, But I fear I cannot be a lot of use.

It is true I was the managing editor of the group which contained 2000AD but there is a great deal of difference between editor and managing editor -- and Kelvin was very emphatic, to say the least, about such a difference. Kelvin was a new boy, brash, self-opinionated and convinced that he did not need any help, guidance or suggestions from a superior. I suppose to a degree he was right. I certainly did not welcome any interference when I was editing my own papers.

I think he regarded me as one of the old school -- associated with Children's Newspaper and Look and Learn, a former editor of Eagle, Boys' World, World of Wonders, etc.

But time and time again eh went over the top with an excess of violence (by IPC standards) and twice he was nearly removed by John Sanders, the editorial director who himself was under certain restraints. And although Kelving paid a nominal lip service to my position, consulting me (telling me) about certain writers and artists he got short shrift when he actually complaiend to Sanders about my 'interference'.

So I have to confess my input to the success of 2000AD was actually quite minimal. And as Judge Dredd has followed Dan Dare into the lexicon of comic book heroes I think the credit should got to Kelvin with me as an involved onlooker. It would be quite wrong for my name to be included as any sort of influence.

Good luck with the book. 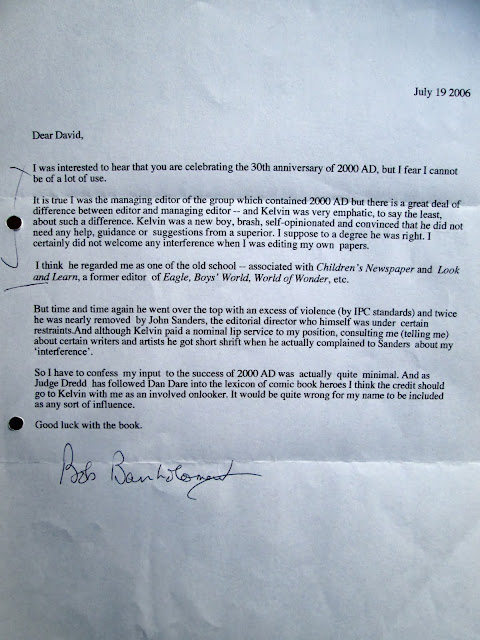 Sad news, he was instrumental in getting the Stainless Steel Rat adaptation into 2000ad.