Films of Michael Caine #36: The Island 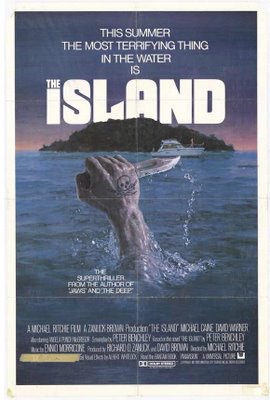 Synopsis: Two thousand people and 600 boats have gone missing in three years near the Caribbean. Journalist Blair Maynard visits Miami to investigate the mystery, taking along his son Justin. The pair has not got on well since Justin’s parents got divorced. All the boats disappeared near an island called Navidad. Maynard and Justin travel to Navidad and hire a fishing boat from an expatriate Brit called Windsor. Father and son are abducted by pirates and taken captive on an uncharted island. Maynard is kept alive as breeding stock, while Justin is brainwashed into believing his real father is Nau, leader of the pirates.

Maynard is overjoyed when he sees Windsor approaching the island in a boat. But Windsor is in league with the pirates. He says they have been on the island for 300 years, with little contact with modern society. To him the pirates are a living anthropological specimen. Windsor tells Nau a sailing ship is passing nearby. The pirates attack the ship, which was smuggling cocaine. Maynard escapes the pirates but Justin refuses to go with him. A coast guard vessel approaches the island, searching for the drug smugglers. The pirates seize the ship and kill the crew. Maynard swims out to the vessel and kills nearly all the pirates. Nau orders Justin to murder Maynard, but the boy refuses. Maynard kills Nau and is reconciled with Justin as a coast guard helicopter arrives…

Peter Benchley wrote the best-selling shark attack novel Jaws. It subsequently became a smash hit movie in 1975, directed by Steven Spielberg and produced by Richard D Zanuck and David Brown. Benchley followed that success with The Deep, which was also adapted into a successful film. When his novel The Island was published in 1979, Zanuck and Brown were quick to secure the film rights. Benchley wrote the screenplay himself, having co-written the previous two adaptations. Director Michael Ritchie was brought on board the $22 million project, having helmed notable films like Downhill Racer (1969) and political satire The Candidate (1972).

Caine was cast as journalist Blair Maynard. In an interview with Film Comment during shooting in August 1979, the actor said Benchley had always had him in mind for the character. ‘I wanted this role very much. Universal didn’t want me, they wanted to see if they could get an American actor.’ Caine said the director and both producers wanted him to play Maynard and had gotten their way. Another attraction may have been the warm filming locations in Miami and Antigua. Caine had recently moved to America and said he hoped to get a better standard of script. ‘I don’t want to do any more schlock.’ [His next three films were to be Dressed to Kill (1980), The Hand (1981) and Victory (1981).]

Caine described The Island as a difficult film, because the subject matter could easily cause audience laughter in the wrong places. ‘It’s a modern pirate story, and when the pirates appear, the situation becomes very delicate. It’s my job to control what the audience thinks about the pirates because I’m really the only representative of the audience who’s there – in the film, I mean. And once you lose them, once they … decide things look foolish, it takes twenty minutes to get them back.’

The R-rated film reached US cinemas in June 1980, with the makers hoping for a summer box office hit. William Goldman’s book Adventures in the Screen Trade quotes producer David Brown about the differences between Jaws (1975) and The Island: ‘We didn’t know whether Jaws would work, but we didn’t have any doubts about The Island. It had to be a smash. Everything worked. The screenplay worked. Every actor we sent it to said yes. I didn’t know until a few days after we opened…’ Brown encountered a studio executive in a bookstore. ‘He said, “David, they don’t want to see the picture.”’

The Island grossed $15 million in the US but got pasted by critics. Caine’s performance earned him a nomination as worst actor at the Razzie Awards, split between this film and Dressed to Kill (1980). The Island limped into British cinemas, where it was rated X. It appeared on video six years later, reclassified as an 18. The movie has since been deleted and has not yet been issued on DVD.

Reviews: ‘The Island is a lethargic venture by the Jaws production team into the dubious terrain of cannibalistic degeneracy.’ – The Observer
‘Once the mystery is banally resolved … the film degenerates into a violent chase melodrama. Michael Ritchie’s witty direction is abandoned in the violence.’ – Variety

Verdict: You have to wonder how the producers of The Island could possibly think this film was a certain hit. Sure, the novels of Peter Benchley had provided box office gold in the past but The Island is simply awful, both banal and tedious. What little suspense the initial mystery generates is thrown away the moment the pirates start talking. The risible dialogue and their farcical appearance plunge the picture into a hole from which it cannot escape. Caine does his best to maintain some dignity in the face of overwhelming odds, but the film sinks beneath the weight of its own ludicrousness. Avoid this movie like the plague.
Posted by DAVID BISHOP at 7:08 am

My name is Michael Caine. Pure madness. Made me want to kill my father.

Far from a ragingly bad movie (see "Star Crash" for a better example of the dismal). It actually starts out as a pretty good horror movie for the time. But, as the review stated the pirates went from being scary to goony as soon as they opened their mouths. The book was actually quite good (though again, farfetched).