Films of Michael Caine #35: Beyond the Poseidon Adventure (1979) 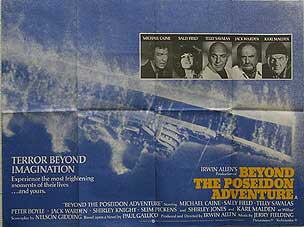 Synopsis: The luxury cruise ship Poseidon is capsized by a massive wave during a storm. Nearby Captain Mike Turner keeps his tugboat Jenny from flipping, but loses his cargo. A bank will foreclose on Turner’s boat if he returns to shore. A coast guard helicopter leads him to discover the Poseidon, upside down but still afloat – just. Turner wants salvage rights to the ship. Another vessel arrives, captained by Stefan Svevo. He claims to be a doctor. Turner and his two crew, Wilbur and Celeste, climb down into the Poseidon, accompanied by Svevo and three paramedics. As they descend, their escape route is cut off. Moving through the corridors, the group finds eight passengers still alive. Turner discovers Svevo is intent on recovering plutonium, not saving lives. Drowning and shootings claim several passengers. Turner succeeds in getting four passengers and Celeste away safely, but loses nearly all the loot he had salvaged. The Poseidon explodes, killing Svevo and his henchman…

The Poseidon Adventure, based on a novel by Paul Gallico, was a smash hit movie in 1972. It grossed more than $80 million in the US, garnered three Oscar nominations and a win for best song. It also created a new genre, the disaster movie. The formula was simple – gather a dozen stars in one location, give them just enough character to make audiences care what happens next, then trap the lot in a disaster with lavish special effects and maximum thrills. Producer Irwin Allen was the master of disaster movies, but by the end of the 1970s the genre had fallen out of fashion.

Allen decided to make a sequel to the film that started the trend. Most sequels either show what happened next or simply remake the story with a fresh cast. Nelson Gidding’s script opted for the latter choice. Allen chose to direct the picture himself, despite the critical backlash to his previous effort, The Swarm (1978). Returning from that film was Caine. ‘I made it for a friend of mine,’ he told Film Comment in 1980. ‘I liked the idea of it. I had never been in a big Hollywood special effects picture before, and I thought the experience would be interesting. Trying to make something of the rather cardboard characters in those movies is quite difficult. Also, I wanted pictures in America. I was just moving there, I needed to start making a living. That was a very important consideration.’

Caine moved to Hollywood in early 1979. In February he told the Daily Mirror that Britain’s crippling tax rates for high earners were not his only reasons for shifting. ‘When I left London last month it was freezing, there were strikes everywhere. If I hadn’t already decided to go and live in California, that would have been enough to make me. Besides the sunshine and only 50 per cent maximum tax, hardly any of my films are made in Britain.’

Beyond the Poseidon Adventure was shot predominantly at Burbank Studios in California. The hull of the capsized ship was constructed on a barge and then floated in the Pacific, south of Malibu. Cast members were flown out by helicopter to the barge for filming at sea. Caine overcame his claustrophobia learning how to scuba dive for the underwater sequences. But all the effort counted for little. Released across America in May 1979 as a PG. Beyond the Poseidon Adventure was savaged by critics and audiences stayed away. Several months later it reached the UK, where the BBFC required minor cuts before rating the film A.

‘I obviously didn’t read the script for either Beyond the Poseidon Adventure or The Swarm and say “This’ll get me an Academy Award, I must do it at all costs,”’ Caine told Film Comment. ‘Frankly, I thought both of these movies would be much better than they were. I had tremendous thoughts about the special effects possibilities … but the effects in Poseidon were so much smaller than in the original. Kind of chintzy, really.’

Beyond the Poseidon Adventure was first released on VHS in 1987 and leaked out on DVD in 2006. Disaster movies made a comeback in the late 1990s with the success of Independence Day (1996) and Titanic (1997), but Allen had died in 1991 and did not see his creation’s revival.

Reviews: ‘More a movie disaster than a disaster movie…’ – The Sunday Express
‘A virtual remake of the 1972 original, without that film’s mounting suspense and excitement.’ – Variety

Verdict: Cheap and cheerless, Beyond the Poseidon Adventure is an exercise in futility. The lacklustre script shamelessly recycles the original film’s plot, adding a mediocre villain. Caine is the lead but rarely gets to do more than spout exposition and grit his teeth. What little action there is grinds to a halt so the supporting cast can each have a moment in the spotlight. Convenient explosions either endanger or rescue the cast, depending upon plot requirements, while Allen’s direction is joyless and dreary, never coming close to attaining the original film’s suspense. The explosion that finally sinks the Poseidon best resembles a firecracker let off in a bathtub. This film isn’t bad enough to be entertainingly awful, merely dull and mediocre.
Posted by DAVID BISHOP at 7:36 am

Dave, I'm frigntened by just how many of these crap Michael Caine films I've seen... and at my local cinema, too! It's not like I was a big fan of Mr. Micklewhite, either. I obviously had no "quality radar" in those days!
Also....
My Auntie had a "thing" with Mr. Caine in the late fifties...
and she never lets us forget it!