Doctor Who and the Brexit Monstrosity 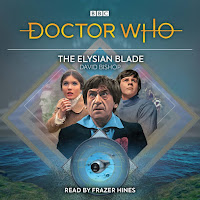 In February 2019 BBC Audio released The Elysian Blade, a Doctor Who talking book written by me. Read by Frazer Hines, it features the Second Doctor [played on screen by Patrick Troughton in the 1960s] with his companions Jamie and Victoria.

They take on a pair of charlatans who dupe people into harming themselves in exchange for false nostalgia. Sacrifice your senses, the villains say, and you can live in some golden world of the past, untroubled by things that disturb you.

I've written for Doctor Who spin-offs in the past. My first Doctor Who novel was published by Virgin Books way back in 1996; three more followed from BBC Books in 2002, 2003 and 2004. I've also written Doctor Who audio dramas for Big Finish Productions, the last of those - Enemy of the Daleks - released in 2009.

All of my writing is, inevitably, suffused with my own views but mostly that tends to be politics with a small p. The Elysian Blade makes no bones about the fact it is a metaphor for Brexit. I voted to remain in the EU in 2016 because I believed it made no sense to abandon the opportunities offered by the UK being part of the European Union.

Since the referendum result, much has been revealed about the tactics and falsehoods spread by those running the various Leave campaigns - little of it good. I won't bother to restate them all, because most people's view of Brexit has long since solidified to the point where arguing changes few minds. But I am still a writer, with things to say.

In March 2018, I pitched three ideas for a Second Doctor audio original. One of them - with the working title 'Senseless' - was chosen by BBC Audio for further development. At that stage it was only a single paragraph long, and I hadn't realised what it was really about. Not yet. Here is the original pitch:


The TARDIS arrives on a world where everyone is missing at least one of their senses - but this is no natural phenomenon. The cause is Elysian Fields, a facility where you choose between the Angel of Forgetting and the Blade of Longing. One of them deletes a memory you never wish to recall again; the other lets you relive a long long moment from your past. As payment you must surrender one of your senses - forever.


I teach creative writing at a Scottish university. In one of my classes I talk about stories having a promise and a metaphor. When you as writer make a contract with your reader, what are you promising them? And what is the metaphor underpinning your narrative, what is it that gives your story meaning?

Having been asked to develop 'Senseless' into a two-page synopsis, I practised what I preach in class and thought about the promise of my story - and pondered for what was it a metaphor? And then it hit me: I was writing about Brexit.

I didn't want to write a didactic anti-Brexit rant. that wouldn't do anyone any good. But I recognised this metaphor had the power to add depth and meaning to my story.

So I opted to lean into it. I would write Doctor Who and the Brexit Monstrosity.

Once that decision was made, everything else fell into place. I needed a dodgy duo to sell their lies and mendacity to the colonists of the unnamed world in my story. Recent British politics have had plenty of craven opportunists, so casting was easy.

And it all still had to work as a Doctor Who story. It needed to have adventure and jeopardy, it needed to embody everything that is great about the Doctor - how he is never cowardly or cruel, how he fights for those unable to fight for themselves, how he uses the power of words and intelligence to overcome the brutality and falsehoods of others.

After several drafts the project was signed off last summer, and recorded with Frazer Hines - who played Jamie in Doctor Who during the 1960s - as reader. The Elysian Blade was released on CD and download in February this year, just seven weeks before Britain was due to leave the EU.

Three months on, the Brexit process has ground to a halt. Britain still hasn't left, with the ill-prepared exit proving to be an impossible task for the UK Government thus far.


The Elysian Blade has had a few reviews, all very positive. So far I've only seen one  that explicitly noted the Brexit subtext lurking beneath my story - and that's fine. It means I did my job as a writer. I didn't shove my views down people's throats, I let them discover the metaphor for themselves.

So, why am I making the implicit explicit now? Ego, perhaps. Will outing The Elysian Blade as an anti-Brexit narrative mean extra sales? Probably not. But I am proud of the story, and I'd like more people to hear it. So here's a tiny excerpt from what I wrote:


'You promised these people they could red if anything they didn't like about their lives, or themselves. You convinced them they could travel back to some imaginary time in the past when they were happy, when everything was simpler, when nothing challenged them or made them uneasy.

But life isn't like that. You have to live in here and now. You make things better by facing them, not by holding on to some idealised version of a past that never existed.'

Having purchased this earlier in the year I must confess that I haven't yet listened due to my attempt to complete the Eighth Doctor Adventures first however I'm reminded of the fantastic Sarah Jane Audios that you wrote for Big Finish and how the final audio ended on a cliffhanger. Did you ever come up with outlines for future audios where this would have been resolved and if so can you share them?

I didn't have an absolute plan for how to resolve, but I did have several ideas. As it was, the wonderful Lis Sladen got her own series on TV with the Sarah Jane Adventures so that put any plans for further audio dramas on hold - sadly, a permanent decision after the terrible loss of such a beloved actress.