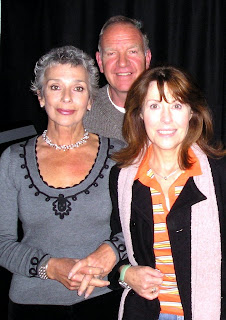 So sad to hear the news about Elisabeth Sladen. I grew up watching her play Sarah Jane Smith in Doctor Who, first alongside Jon Pertwee and then during the first wonderful few years of Tom Baker's stint. When I was commissioned to write my first who novel for BBC Books, there was never any doubting my choice of companion.

When I heard Big Finish was going to produce Sarah Jane audios, I badgered poor Gary Russell relentlessly until he let me pitch a story. Lis herself choose mine effort, Test of Nerve, as one of the scripts for the first series. She sent me a lovely, handwritten letter of thanks afterwards, one of few mementoes I've bothered to keep.

Then in 2005 I was asked to write the whole second series of Sarah Jane Smith audio adventures. Lis was actively involved in the development process, suggesting story ideas and making sure we maintained the integrity and spirit of the character. While that was happening, Russell T Davies brought her back for the new series of Who on TV.

[For a while, it looked like Sarah Jane's appearance in School Reunion might cancel out all our efforts on the audio dramas. But the production office in Cardiff kindly let things go ahead, for which I've always been grateful.]

The photo shows Lis with Tom Chadborn [Duggan from City of Death] and the delicious Jacqueline Pearce [Servalan] in a break from recording Sarah Jane Smith 2.3: Fatal Consequences. I think that was Doctor Who anniversary day, November 23 2005. A wonderful day in the studio, watching all three of them act up a storm.

I'm proud of all five Sarah Jane audio adventures I wrote for Lis, so glad they did her and the character justice. They pale into significance alongside The Sarah Jane Adventures, Russell's delightful Who spin-off for younger viewers. They cemented Lis's place in the hearts of another generation, they'll remember her all their lives.

And now Lis is gone. I still can't believe it, don't want to believe it but some sad truths can't be avoided. Deepest sympathies to her friends and family, especially Brian and Sadie. Lis will always be our Sarah Jane...

She was my assistant too growing up. And my son loves her in Sarah Jane Adventures. So very sad.

Thanks for that, David.

I am in tears here.

I'm still in shock, I can hardly believe it.

Out of curiosity, were there any plans for another series of Big Finish audios -- a sequel series to Series 2? I feel like Dreamland was really such a wonderful cliffhanger...