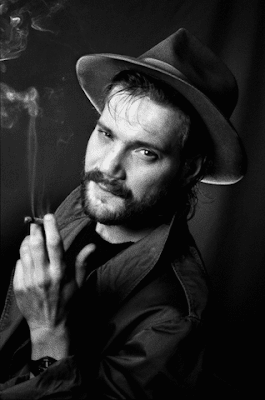 Since iconic British weekly comic 2000AD launched in 1977, it's only had nine or ten editors. [One of two found themselves doing the job without ever officially having the title.] Current incumbent Matt Smith [no, not the actor from Doctor Who - another Matt Smith] recently became the longest serving editor in the 34-year history of 2000AD.

But the person his tenure surpassed is one of the most important and unsung heroes of British comics: Steve MacManus. Now, that's merely my opinion and I'm biased because Steve gave me my first job in comics and was my mentor while I learned how to edit sequential narrative. But here's some supporting evidence [your mileage may vary].

Steve took over as editor circa Prog 100, probably around Christmas 1978, where the comic was in trouble. The weekly anthology was under close close scrutiny from the management at its publisher, IPC. A recent merger with Starlord comic had given 2000AD a boost in terms of content and creators, but British comics were struggling.

Over the next eight years and 400 issues the self-proclaimed greatest comic in the galaxy would earn that accolade with a golden age of brilliant stories and stunning art. Many of those elements were already in place when Steve arrived, but the title was misfiring due to behind the scenes power struggles and creative tensions.

Steve brought stability and savvy to the comic. Recognising the talents he had available, Steve adopted an editorial policy of employing the best people available and enabling them to do their best work. The results were stunning, a brilliant array of stories and art that hasn't been surpassed since in my humble opinion.

Writers like Wagner, Mills, Grant and Alan Moore blossomed. New scribes such as Grant Morrison and Peter Milligan emerged. Great artists like Gibbons, Gibson, Bolland and McMahon did some of their finest work in this period on 2000AD. Amazing new talents like Simon Bisley, Glenn Fabry and Steve Dillon were nurtured in the comic.

You want great strips and characters? Try Halo Jones. Rogue Trooper. Judge Death. Fiends of the Eastern Front. Nemesis the Warlock. Slaine. Ace Trucking. DR & Quinch. Bad Company - and many, many more. 2000AD has had its moments since that majestic run that stretched from 1979-1986 under Steve's leadership, but none so long or great.

The fact that 2000AD is still going today, 25 years later, is in no small part due to Steve's time as editor. The creators get the glory for the amazing work they did at the time and have gone on to do since, but editors like Steve rarely get the kudos they deserve for the long hours and commitment they put into their jobs.

By now you're probably wondering why I'm telling you all this. Such praise normally gets saved for a person's eulogy, when they aren't around to hear how much other people value them. Happily, that isn't the case with Steve, who's still going strong. His direct association with 2000AD ended when the weekly was sold in the year 2000.

Oxford-based games developer Rebellion bought the Galaxy's greatest comic from Egmont. Steve stayed at Egmont, continuing an unbroken stint in editorial that stretched back to 1974. But in April this year he's moving on in pursuit of other opportunities. So I thought it was worth showing Steve some respect for all he did at 2000AD.
Posted by DAVID BISHOP at 7:46 am

Email ThisBlogThis!Share to TwitterShare to FacebookShare to Pinterest
Labels: Respect Due, Steve MacManus

Pass on my regards next time you speak to him.

I've never met him but I remember him even farther back than 2000ad.

Best wishes to the "Action" man.

Thanks for this, he deserves all the praise.

What you don't really touch on is how he helped save 2000AD after the early 90s slump. As I argued on the "Which editor 'saved' 2000AD" thread - he helped start the Megazine, he got you in as editor and the Megazine then acted as the place that would bring in and develop new talent during the early 90s. It is this talent that would for the core of the recovery in the late 90s when you and John Tomlinson took over, a period when he also worked away in the background (it was MacManus who got John Wagner back on Dredd in 2000AD after a long absence).

Anyway I wish him all the best in his new ventures.

Wiessmuller said...
This comment has been removed by the author.
7:49 pm

remember him from action comic days & 2000ad 1-790 when i stopped buying it.best of luck to him. ( always wondered why money man never turned up in blackpool? we were there but he wasnt!!! )