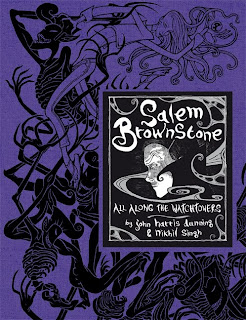 Comic artist Nikhil Singh, illustrator of the acclaimed graphic novelSalem Brownstone: All Along the Watchtowers has been held in South Africa for five months - unable to attend his own book launch - due to new Home Office rules that deem him 'underqualified'.

South Africa-born Singh has been a resident of London for three years, but cannot return due to the Home Office's decision not to renew any Artists' Visas. This means international artists whose visas have expired must reapply for a Tier One Highly Skilled Worker Visa which cannot be obtained without a degree or similar proof of tertiary education.

Despite being illustrator of a graphic novel acclaimed by the Financial Times, the Sunday Express and comics legend Alan Moore, Singh was told he does not qualify for this visa because he does not have a degree. He was also made to take an English language test, despite having worked in the UK as a journalist for many years.

Unable to leave South Africa for the past five months, Singh has lost his London home and been unable to see his girlfriend of seven years as a result. He has spent more than £2,000 appealing this process, without success.

Nikhil Singh says: "This new legislature speaks poorly of a country previously renowned as an international nexus of arts and culture. The fact that so many academics and artists are being refused entry for such petty reasons only weakens England's cultural backbone. The new immigration laws have insinuated an atmosphere of creative policing that is entirely out of character with the various professions it has effected."

Paul Gravett, Director of Comica Festival and author of Graphic Novels: Stories to Change Your Life says: "The refusal of Nikhil Singh's application for a Highly Skilled Worker Visa ... is short-sighted and prejudiced towards the graphic novel medium, and plainly ignores his exceptional merits. One look at the extraordinary craftsmanship of his contributions to the Salem Brownstone graphic novel would convince anyone Nikhil is not only 'highly skilled' but a visionary artist of international standing."

Salem Brownstone: All Along the Watchtowers launched in a sell-out Salem Spooktacular event at the Institute of Contemporary Arts in London last month.
Posted by DAVID BISHOP at 9:03 am

Absolutely disgraceful. I hope this gets resolved, but I have little faith in our current government as it stands.

So let me get this straight- the government will allow airplane hijackers, radicals who espouse the destruction of the UK's democratic system, rapists and other nefarious elements not only into the UK but will also give them "asylum" status in many cases- regardless of the risk they pose to British citizens...but they will ban an artist/journalist (one able to pay his own way and not have to live off benefits) all because he lacks a degree?

What genius thought up these rules?

How can we help?

This is something I cannot believe. I'm an artist in training myself and this kind of behaviour is the sort of thing that I actively dread in my day today life.

It will ruin us as a Nation known for our creative culture and our artistic freedoms. There used to be a reason artists came to the UK from all over the world and it has improved us most importantly culturally but also economically

This actually disgusts me and I honestly can't just sit by and complain about the government and state how insignificant I feel about it.

So I ask again.

How can we help?

what a site it is .it sreat a sensation.free mp3 download

Absolutely disgraceful. I hope this gets resolved, but I have little faith in our current government as it stands.

I have read this story it is very nice.It is good and nice blog post. really very interesting it.