My novels #6: The Domino Effect 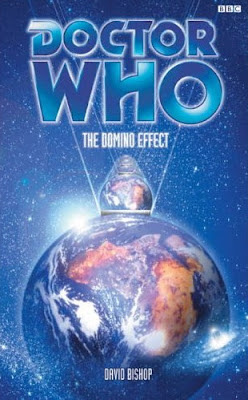 The TARDIS lands in the Scottish capital, Edinburgh, during Easter 2003. The city is almost at a standstill, its public services close to collapse and its people terrorised by a bombing campaign.

Without hours one of the Doctor's friends is caught in a deadly explosion, while another appears on television confessing to the murder of twelve people. The TARDIS is stolen by forces intent on learning its secrets. When the Doctor tries to investigate, his efforts are hampered by crippling chest pains.

Someone is manipulating events to suppress humanity's development - but who and why? The trail leads to London where a cabal pushes the world ever closer to catastrophe. Who is the prisoner being held in the Tower of London? Could he or she hold the key to saving humanity?

The Doctor must choose between saving his friends or saving Earth in the past, present and future. But the closer he gets to the truth, the worse his condition becomes...

This is another in the series of original adventures for the Eighth Doctor.

I rate this among my worst writing experiences, though the novel itself has some merits - they're just too few, and too infrequent. The book was the second in a series of three alternative histories tales, meaning whatever happened would be wiped away by a giant reset button when the story ended. As a consequence, any regular reader knew going in that nothing in the novel mattered, and there was no need to care about any of the characters it introduced - all of them were doomed from the start, killing any suspense or empathy. The book also included a shopping list of things to achieve, few of which added anything to the narrative.

But the real problems stemmed from the way I chose to write The Domino Effect. Normally I create a very detailed roadmap of my story's journey, but leave plenty of spaces for sidetrips, diversions and shortcuts. I write from the beginning to the end and let the characters react to changing events as they happen. It gives them a chance to evolve spontaneously when required. By the time I wrote The Domino Effect in 2002, I was feeling cocky. I'd had five novel published, I figured it was time to change my methods. Big mistake.

When my usual method allowed me to improvise and ignore my synopsis if necessary, the single-stranded approach locked me into whatever I'd written in the first sequence. My improvisation allowed, everything had to follow as if by rote. The result was lifely, lacking in any spontaniety or narrative drive. Writing it was like pulling teeth and giving blood simultaneously. Writing a novel's never easy, but when you're flying your fingers can't type fast enough for your imagination. That never happened on The Domino Effect.

I did enjoy writing the tragic lovelife of computer genius Alan Turing, and the best moments in the novel revolve around him. There are also some lovely interludes set in various pasts, particularly a brief sequence involving the [fictional] murder of Charles Babbage. But as a whole the novel is lifeless and dull. It got shredded by readers and reviewers, and rightly so. The horrors of this novel shook my confidence, and it'd take me another novel or two to get my writing mojo back in action.
Posted by DAVID BISHOP at 6:37 am