Who you calling Clint Flicker?

Anybody who's ever worked in comics will tell you it can be a dangerous medium. Not dangerous in a firefighter walking into a burning building kind of way. Not even in a rescuing a kitten from a high tree kind of way, come to think of it. Alcohol poisoning at comics conventions can sometimes a problem, and there was the case of the creator so unpopular people wrote obscenities on his forehead in indelible ink while he was insensible from drink - but nothing especially life threatening.

[There was the case of the famous comics artist who thought it hilarious to hide in his work an incredibly libellious accusation about a famous British pop singer who's had hits for fifty years. It got into print but, fortunately, nobody outside the editorial office noticed. The offending text has since been scratched off all copies of the relevant films, to prevent the libel being reprinted. Not exactly dangerous, but it could have been very, very expensive for somebody.]

No, the danger stems from the fact most comics are lettered in UPPER CASE i.e. all the dialogue and text inside caption boxes tends to appear in CAPITAL LETTERS. How could this be dangerous, you ask? Well, for the longest time comics were a mass market medium, printing cheap to be sold cheap.  There's still a tendency for lettering to blob together sometimes, particularly when I follows L.

As a consequence there are two words [plus their variants] in comics dialogue and caption boxes that can get you into all sorts of trouble if you're not careful. Never used the word FLICK or its variants, and never, ever, ever call a character CLINT if you can possibly avoid it. Those of you with deft imaginations or dirty minds will already know where I'm going with this. For those of you that don't here's a classic example from an Avengers comics, where Captain America calls Hawkeye a very rude name indeed. [You kiss your mother with that mouth, Cap?] Look no further if easily offended... 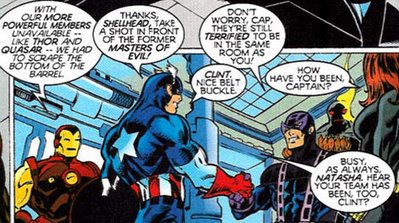 I remember a similar problem involving a drum machine made by Yamaha that only had enough display space for 5 characters, and had two kits based on recordings of people counting. Obviously Count1 and Count2 had to be abbreviated in some way and the Japanese programmers decided to do this by removing the letter "o" in both cases.