Breaking a story with Post-It Notes

A lot of American TV dramas use a writers' room to brainstorm plot and structure [a process knowing as breaking the story]. There's one writer in charge - the showrunner - who is responsible for maintaining and protecting the creative vision of the series being built in the room. Often the showrunner originated the series, but not always.

The showrunner hires other writers to help them break individual stories in the room. Once these are sufficiently developed, the episodes are assigned to one of the writers [or writing partnerships] in the room to work up into a treatment [or scene by scene breakdown]. Once that's nailed, the writer or partnership script the episode - but the final draft of that script is almost always by or given a polish by the showrunner.

[You can read a lot more about writers' rooms, how they work and what can go wrong in a fascinating roundtable discussion here. You can see the writers' room in action for The Sarah Connor Chronicles here and here. Warning: these YouTube clips contain spoilers for both seasons of the show.]

Alas, when you're developing the script for a new putative TV drama of your own devising, you don't have the luxury of a writers' room to help break the story - you have to do your own heavy lifting. You have to find the voice of the show, the tone, the storytelling approach, the narrative format, the characters, the sequence of events, the shape of the structure - the everything, in other words.

I'm working on a new pilot script for a returning drama series at the moment. Having already spent a lot of time thinking about my core characters and my basic concept, I've devoted much of the last week to breaking the story for my first ep. Now, if it was a show that followed one main protagonist with a supporting cast of characters, that might have been a little easier. But why make things easy, right?

I decided to write a show about three main characters, each with their own story strands. Each character has a thematic plotline that develops across the first ep, along with a bunch of smaller subplots that pop at various points. Right now, I don't know which character will emerge with the big A story. I've got my suspicions, but I'm leaving wiggle room in case one of them demands the spotlight.

Next I wrote each character's story beats on to coloured Post-It notes. As a rule, I try to keep each note down to six words. If you can't describe the vital elements in six words, you've got more than one beat on a Post-It. [I fail spectacularly at this, by the way.] Next, the really fun part - sticking all the Post-Its to a whiteboard and arranging them into order. Then rearranging them, again and again. 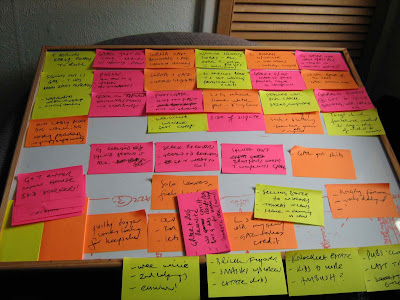 In the picture above, you can see an in-progress version of my whiteboard for the ep I'm developing at the moment. It's moved on a lot since this photo was taken, but you get the idea. I'm not claiming this system is original, foolproof or a work of genius [I wish!], but it seems to work for me. Some people use colour coded index cards and a pin board, others prefer to use an iPad and an app called Corkulous.

After much rearranging of notes, I'm about ready to transfer my plot points into a Word document - effectively a beat sheet for the first ep. From there I'll be working the elements up into a scene by scene, once I've figured out where and when each scene happens [not to mention emotional beats that happen around plot points]. All before I get to write a word of script. Oh well, respect the process. Onwards!
Posted by DAVID BISHOP at 7:41 am

Thanks David, that is v. helpful!