Brian Bolland was among 2000 AD's most acclaimed artists in its early years, but also one of the comic's least prolific. Here's the first half of the transcript for the interview I did with Brian for THRILL-POWER OVERLOAD. It begins with him recalling what he was doing before joining the weekly...

January 1975 until sometime in 1977 I was drawing Powerman for Pican Publications. It was published in Nigeria and later reprinted in South Africa. Ron Tiner changed some of the panels. The people behind Pican were teachers who wanted to bring literacy to Nigeria. Everything had to be very simple, no breaking the panel borders. Which was good because it taught me discipline. Powerman was a generic superhero. The stories were quite banal. I met the artist Siku who comes from Nigeria and he remembered reading it as a child.

My agent and Dave’s agent and Carlos’s artist was Barry Coker of Bardon Press Features. Our careers were being managed with him. He had connections with Spanish artists and links with IPC. He was putting the right people together. When 2000 AD was being put together, I think he was approached to provide artists. I don’t know whether Jesus Blasco who was in the first issue, I don’t think if he was one of Barry’s.

We had a meeting in Barry’s office where we were being shown the dummy for 2000 AD. Me and Dave went in, and Dave started in the first issue. I carried on with Powerman for the next six months or so. We didn’t know whether 2000 AD was going to be a big thing but I was quite keen to see how it looked. But I couldn’t get my hands on the first issue, it sold out straight away.

British comics were in rather poor shape if you were a new artist, trying to break in. You had to have an agent. There were no science fiction comics, they died out with the Eagle. When I first went to Bardon, they got me drawing samples for Napoleonic war stories and romance stories, all sorts of things.

You were drew covers on 2000 AD for the next seven months – why?

Some of them were pretty dreadful! They did these things called Supercovers. They said just come up with ideas. They wrote a little paragraph explaining the cover. I just sat down with a blank piece of paper and just came up with vague ideas. They were probably inspired by things like Strange Adventures in the 60s. I quite liked the Prog 27 cover with the astronaut and the frog, but the coverlines didn’t really relate to the picture. 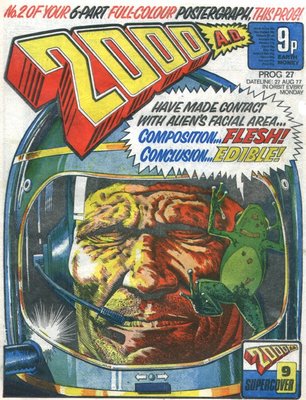 Nick Landau says he had to lobby hard for you to get a strip commission. That came in Prog 41 on Dredd, part two of Mega-City 5000 – memories?

I ended up doing that because I was asked by Nick. We were a little club of comics fans. WE had all met at the 1972 comic convention at the Waverley Hotel. All of us had somehow met at that and got to know each other, all comics fanboys. Nick asked me to draw my first Dredd strip and a lot of my subsequent Dredd work came via Nick.

That was a very quick cover. Some of those covers were done very quickly. I drew him in profile, his head. I think somebody in the office redrew the head. They stuck a new head over the top, looking directly at the reader.

Next you drew six episodes of Dredd on the Moon – whose idea to give Dredd a cape? It looks kind of superheroic!

He had a cape? I cannot imagine that! His helmet a lot from story to story. I always credit Mick with the evolution of the character’s look. I don’t know if that’s unfair on Ian or Carlos but I always thought it was Mick. He was the one we were all watching. Every time he turned in a story he’d moved on somehow. I remember turning up with a cover and Mick’s story had turned up that day and everyone was squatted around a desk, looking at the new developments. Slightly new shape to the helmet and the eyepiece changed shape…

The picture of Dredd’s face – that was a 1940s actor called Rondo Hatton. I’ve only seen him in one film.

The Cursed Earth saga ran for six months, yet it only had two principle artists – yourself and Mike McMahon – was that a strain? Hero or anti-hero…

There was always this kind of pull – was Dredd a hero or an anti-hero? I always preferred him as an anti-hero myself.

I was always slow, so the pressure was on Mick and me. 2000 AD paced me, they knew how quickly I could do something. They would schedule ahead to get my stories in.

That’s right! I must have been really up against it for time, then. Dave inked one of the Tweak episodes.

Euro artists got £53 a page on early progs, but British artists only got £49…

That needs to be told! We never felt good about the management, at all. We always felt they thought of us as chattels, slaves. We were some sort of humanity on a level beneath them. We didn’t even know their names. If you tried to contact them, you were fobbed off by secretaries.

Where did the pen name of Bollo come from? It appears on some of your early 2000 AD covers...

I called myself Bollo on a few occasions, I think it was a hangover of fans days. Dave Gibbons was Gibbo, I was Bollo…

Do you have a favourite episode of your work on Cursed Earth?

The Mt Rushmore double spread – that was a good one, wasn’t it. The first episode of Dredd I ever did had a double-page spread. I always hated a dps, because I was used to doing little boxes from Powerman. I remember I was at somebody’s house with Nick and Mike Lake. Mike was coaching me on how to fill a dps, because he was a big Jack Kirby fan. It might have been Land Race.

The Jolly Green Giant – that was a rushed one. I quite enjoyed that one. There are certain pages that worked well, but they’re dotted around the place – they’re not all in the same story.

There was a toy tie-in – the Killdozer, it was a real story. They gave us this toy to draw it into the story. The script said I had to draw the Killdozer driving up the face of Mt Rushmore. There was no way this thing manage it, but I just drew what I was asked to do. It was going pretty much vertically. It didn’t look very convincing to me, but there you go!

I was always able to detach myself from the story and just concentrate on the technical aspects. So, there are certain pages where there are fewer errors, those are always my favourites, but they are scattered all over.

Apparently the JGG can never be reprinted, but it is available on websites. People know they can’t control it. I don’t think anyone’s reprinted the whole story, in print or on the internet.

I guess we were that comic fan generation. American comics came into this country in 1959 and that kicked me off on American comics. I suppose that applies to the whole generation of people like me, Dave Gibbons… I always acknowledged the fact I was an American comic book artist trying to work in a different medium. At the time I don’t think 2000 looked like an American comic, particularly.

You only drew a few episodes of the Judge Cal saga – why? Burnt out?

I don’t think I was burnt out. You feel more comfortable that you won’t lose your job if you get a night’s sleep. I was more and more taking advantage of being given extra time to do my work. I timed myself once and it took me 12 hours to ink a page. I’ve never been able to estimate how long it will take to draw things.

I did draw the Walter the Wobot as another entity, because it was comedy. 2000 AD always was eclectic. I mean, it stole things from everywhere. If there was a good idea on the go, 2000 AD would give it a fresh spin. It took things we recognised in our culture and put them in a slightly different context. I don’t think I’ve ever found anything with the mix of black humour like 2000 AD. It’s sad, really…

I had to suddenly learn how to paint. I suddenly how to buy myself pots of inks and learn how to apply colour. I only ever drew one story in colour.[Alien Zoo in an annual.] I found it such hard work! My colour sense wasn’t very good then. I can just about compose colours in a single image to make them look balanced, but I’ve very rarely drawn colour in an entire comic strip page and balanced them all. It’s clever for people who can do it.
Posted by DAVID BISHOP at 8:08 am

A nice interview. I wouldn't call myself a fan as such, but I remember all the 2000AD stories and episodes etc. mentioned in the interview. I kept every issue from the beginning for the first I don't nkow how many years and then my mother made me get rid. What a mistake that was. I'd love to read through all those stories again. Dredd, F.L.E.S.H., Strontium Dog, Rogue Trooper, plus all the one-off stories that used to appear each week.
Mr. Brian Bolland, if you're reading this, I owe you a debt of gratitude for your part in forming who I am today.
Big up.