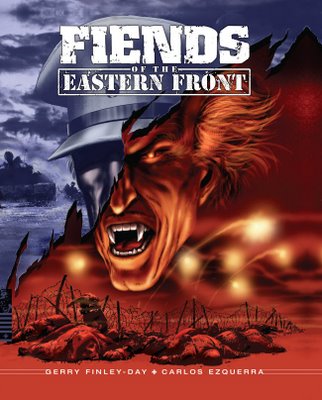 Here's the second half of my 2002 interview with 2000 AD writer Gerry Finley-Day. For someone who co-created so many celebrated [and much revived] series for the comic, Finley-Day has given remarkably few interviews over the past thirty years. This section opens with his recollections about devising Roman slave turned gladiator Blackhawk for launch editor Kelvin Gosnell at 2000 AD's sister title, Tornado...

I wanted to have a black guy as a hero, which was unusual in those days. We thought of a black sailor at first, but it didn’t quite work. There were worries about being racist, films like Shaft had that problem. I was very into the Roman thing at the time. I wrote a lot of historical stuff, even now. You never see black Roman legionairies, but you’d see them as auxiliaries. I thought it was the auxiliaries, the slave troops who did a lot of the fighting. It was almost like the guards meet the Dirty Dozen.

That was the idea, having an outcast doing the Roman’s dirty work for them and never being accepted as one of them. [Blackhawk goes to 2000 AD without GFD.] They did something weird with it. I can’t remember why I wanted to stop doing it. [Alan Grant says GFD declined writing sci-fi Blackhawk.] I can’t remember that. Alan might well be right.

You brought back Bill Savage in Disaster 1990...

That’s right. [A prequel to Invasion, which was set in 1999] We had to have it still pretty much the old London, so we could show the flooded landmarks.

Again, it was a spin-off from the Dan Dare thing, the gritty war thing. A gang type thing. Also, I think Starship Troopers – I hadn’t read it, bnut I knew about it. I thought that kind of feel, the tough guy soldiers. It was very much a Battle type thing, a war time thing. The Ferrero War was another big book at the time, John Wagner gave it to me, that was very much like Starship Troopers, an updated version but not nearly as good. That later suggested Rogue, I think Dave mentioned Starship Troopers as part of the inspiration.

The VCs is being revived in 2000 AD – how do you feel about other people writing your characters?

They should let me know, just out of courtesy. It all depends. If they have ideas, sometimes you can introduce new things. Other times they can throw the baby out with the bath water.

Fiends of the Eastern Front – a quirky classic. How did it come about?

Fiends is very much my baby. To be honest, it was always a thought. The idea of Romania. I don’t really know. It was just an idea. I think it was the idea of having a twist on the Dracula story, you had Romania as part of the war. Not much was known about it. It was done very, very quickly. It brought something from both sides, war and the horror. There was a lot of mileage there.

I think we were limbering up. Rogue Trooper took a long time to come, and then the Harry 20 thing. There wasn’t a gap as such for me. There was a lot of preparation on it [Rogue]. Fiends was just to fill in. There was a lot of mileage, a lot of getting the scripts together at the time. There were some other new publications launching at the time, I was probably writing for them.

I don’t know. The VCs was there. There was an awful lot of input from Battle and previous stories. Things like Rat Pack and D-Day Dawson. It’s different to remember who did what, it was very much a shared thing.

[Reader survey] That’s right. [Lone character.] Yeah. [Human Eurofighter.] Right. Then we moved it on from there, mulling it round. The equipment became more important. WE thought let’s animate the equipment some how, if only so it talks to you. The equipment to have a personality of its own. You’re left with very much like these old films where the guy is left on his own, all his friends are dead, they’re like ghosts coming back to help him. Umpteen forties films like that, old visions, trying to keep that sort of thing in place. The guys were supposed to be like ghosts.

Rogue Male was a big thing at the time, they remade it on TV. It was the blueprint for Day of the Jackal, really. Still a good story. [Bio-chips] That’s right. [Chips inspired by a Dredd story?] That’s right. There had been talk about that. I can’t remember where it was. The bio-chip thing was being talked about. It was a neat way of doing it. The dog-tag. Any of these old war films, you grab your buddy’s dog-tags – the idea of the bio-chips came from that too. A high-tech, sci-fi version of that.

Rogue Trooper has been your most enduring creation – why?

I can’t honestly think. There were lots of ideas there. In some way we penned ourselves in, the traitor quest thing could have been improved. Again, it was a bit like The Fugitive pursuing the one armed man. But The Fugitive, that went on for years.

Towards the end of 1982 you added another great series to your list of credits – Harry 20 on the High Rock – what inspired that? Escape from Alcatraz?

Yup. That’s very much what it was, the idea of a prison satellite. I thought that would be the next stage anyway in how you get rid of people. Also, Papillion, the idea of Devil’s Island. Sticking people somewhere so they’re out of the way.

The revelation that Harry’s friend was a robot – a great shock moment!

I hadn’t seen Alien at that time, it’s very similar twist to the film. That sort of thing had been done before, like in Bladerunner.

Your scripts were often rewritten by the editorial team – how did you feel about that?

You kept writing Rogue until the end of 1985. Should the strip have stopped when the Traitor General was finally brought to justice?

By that time I was novel writing. You could have done more, but the Colonel was the root of the storyline. You could redo it, I suppose, but that was really the story – the quest. If you come up with another reason why he has to stay rogue, it becomes slightly more contrived.

Rogue – it’s your own baby, isn’t it? I wouldn’t dream of putting myself in the same category, but it’s like James Bond novels. There was umpteen attempts to do Ian Fleming books by various other authors. But it’s either your genetic baby, your creation, or it isn’t. It’s going to come out different every time. A different set of hands on it. It doesn’t matter how good they are, it isn’t going to be the same thing at all.

What have you been doing since you time writing for 2000 AD?

Historicals, thrillers, ghost writing. Some screenplays. Some other books.

Looking back, what’s your abiding memory of your time writing for 2000?

A lot of it is just work. You can look back on things and see good touches, but it was basically work, that was all. You can get all puffed up about things, but it was just work. You try not to get into a treadmill mindset. It’s like a magic illusion that disappears if you focus on it too much.

Your favourite story for the comic?

Fiends – and Rogue Trooper, of course.
Posted by DAVID BISHOP at 7:32 am