I interviewed Gerry Finley-Day by telephone in April 2002, as part of my research for THRILL-POWER OVERLOAD. He's one of the key writers from 2000 AD's early years, co-creating or writing many of the comic's most significant and beloved strips: Rogue Trooper, The VCs, Fiends of the Eastern Front and many more. The excerpt starts with Gerry describing what he was doing before 2000 AD was launched...

I was writing for a whole gamut of IPC magazines, a lot of which were girls’ comics. I had been an editor on the girls’ side. Also, a lot of war stories because I had freelanced years before that on DC Thomson’s war libraries. So it was just another tour, another title. 2000 AD was an extra new slot. 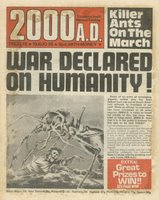 I knew Pat and John from years back. They had similar sort of backgrounds to me with DC Thomson. They were actually working up there, I never actually worked on the premises. So they knew me. They started Battle, IPC’s answers to the Thomson style of war comic. Battle was very good, very very well produced. I started writing for that. I went freelance from IPC about that time, there was an awful lot of opportunities. It was a sort of follow on from there. It was really through Pat. There was Action and then from Action begot 2000 AD. From war to a more general title to slightly more specialised again with science fiction. Again, there had been nothing from IPC or Thomson’s on sci-fi. It was a natural progression, wheel upon wheel.

The first strip you wrote was Invasion, after Pat wrote the opening episode…

Pat wrote all the first episodes, including Judge Dredd as well, I think. That was the way he handled it, he started them off, all the first 2000 AD strips himself. Then he passed them on. Bill Savage was based on Stanley Baker’s character in the film Hell’s Drivers. Pat’s thing was always to know a good blueprint in a film or some other source, something that could connect in readers’ minds. Again, like Judge Dredd was a reminder of something else, Dirty Harry and Clint Eastwood. Bill Savage was Stanley Baker in Hell’s Drivers. It was a sort of British Magnificent Seven. It’s one of these films where they gang together. Everybody in it is very young, but they all went on to be significant later. Sean Connery was in it. Patrick McGoohan was in it too.

That’s what Invasion was all about, trying to transplant a sort of typical British style lorry driver into a futuristic setting. Of course, we’ve gone past 1999 now!

You wrote four of the early Judge Dredd strips – what do you recall of these?

There were a number of people who did that. We were asked to fill in, there was a whole situation. It was really John’s baby, although Pat had a tremendous input there. I wrote one or two, I can’t remember how many – not very many. I didn’t like to get too involved in somebody else’s bag.

You took over writing Dan Dare in Prog 28, with Dave Gibbons as artist...

That’s right, that’s how Dave and I got together. They wanted us to make Dan Dare a bit different to the 1950s style, slightly middle class, slightly public schoolboy thing. We had to make him grittier. We started to make him far more… Star Wars was just around about then. We were aware of the film and had ideas about its story. I bought a couple of Marvel comics adapting the film. Some people went to see Star Wars not knowing what it was about, but I went in knowing the story already, I made sure I did. From that, we knew Star Wars was about transplanting pirates into space, and the Wizard of Oz and other things.

So we used for idea for Dan Dare, having him move around planets and getting very military and gritty. Star Wars was the first gritty, military style of sci-fi. The rest tended to be a little bit Logan’s Run, lots of 70s camp. Star Wars looked dusty and dirty and Second World War-ish.

You were very prolific, writing Dan Dare and Invasion simultaneously, some weeks writing half the comic – how?

Did I? I have several series on the go, and girls’ stuff as well. There was a lot of work on then. These were days when there were tons of titles around.

Invasion was phased out after a year in Prog 51 – what do you remember most about Bill Savage?

He was a British style tough guy. Then we did the flooding one, which was after that. Rutger Hauer, he’s always been a favourite of mine, although he’s getting on a bit now. He did a science fiction film called London Under Flood or something. Late 80s.

Your next creation was Ant Wars – memories?

It was inspired by Them!, which was still one of the best science fiction films around, even then. Again it plays with the military angle. The giant creatures were like the communist menace coming, they’ve got to be dealt with Japanese soldiers in caves, or even the Al-Quieda in the caves. Going into the caves after them and taking them out. Ant Wars was the same sort of idea. They were soldier ants. There’s been a few good films about that. Ants who’ve got intelligence, who act like enemy soldiers, getting across rivers without you realising it. That series was only a quick thing, a quick fix if I remember rightly.

That’s one of the stories where I wish, I regret now. The main characters I should have had. It was around the time, the late 70s, of the Argentina World Cup. Scotland was the only British team that had qualified to go to Argentina. England hadn’t gone. I had the idea which should have been instead of a couple of pretty uninteresting guys, there should have been a mad Scots football supporter and an English embassy official trying to get him home. There should have been an interplay which would have been far better. I regret that. We used it straight on the plot rather than as characters. It came about that way. There is an ant menace, as it were. Empire of the Ants was another film out about that time.

Ant Wars got cut short because 2000 AD was being merged with Starlord. There could have been more mileage in it. The two guys could have kept meeting the ants all over the world, there’s always a football match on somewhere. An embassy official who’s a drunk. It was short-lived, as you say.

One episode had a topless woman – recall this?

That’s right. The ants had infiltrated the Rio carnival under a float, so nobody noticed them. The ants were ultra-intelligent, outsmarting human beings, just like enemy soldiers. They also cleared a runway. They took a runway, just as soldiers would for a huge transport plane to come in. The queen ant was too big to land anywhere else.