Greenock: it's further away than you'd think 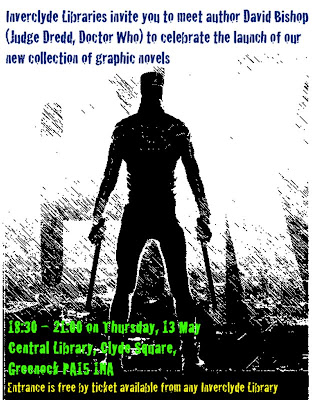 Did an event at the Greenock Public Library last night to help promote its new collection of graphic novels. Having clocked the fact that teenagers and young adults were not using the library much, Inverclyde Libraries chose graphic novels as a way of getting that audience in. The library now has 300 titles ranging from Kick-Ass to Gemma Bovary, 300 and Robert Crumb.

Despite some dismal weather, the launch got a great turn-out [four times the audience for Ian Rankin, apparently]. But the event was not a one-off. The library is also running a ten-week course on reading and writing graphic novels [already fully subscribed]. And the books were flying off the shelves while I was there last night.

There was coverage in local papers beforehand, and I got interviewed for a local radio station and by STV for one of its news magazine shows. All in all, a well organised and enjoyable event. I wish other libraries would follow the example of Inverclyde Libraries. If you want to reverse an aging readership trend, you need to take action. [That applies to comics publishers, too].

For some reason, I hadn't grasped how far away Greenock was. In my head it was somewhere near the southside of Glasgow [suspect I was been confusing it with Govan]. Three hours before I was due to leave, I thought it best to look up my destination online. Turns out Greenock is so far west of Glasgow, you go any further and you'll be swimming.

A quick reassessment of my plan to drive there followed, especially as I'm on another deadline at the moment. Instead I blatted across to Lanark and got the train to Glasgow. Switch trains and on to Greenock, a journey of about 2.5 hours. But I managed to write several chunks of a scene by scene en route, so it wasn't wasted time. All in all, a good day. Onwards!
Posted by DAVID BISHOP at 9:14 am

What a great idea and congrats on the library for being forward thinking enough to promote a scheme like this. Comics like these are great gateway literary to the joys of reading. Long live the graphic novel I say!